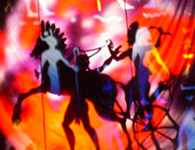 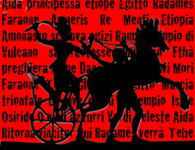 The performance is presented in two versions:

With Verdi's Aida CONTROLUCE Teatro d'Ombre continues its research on shadow theatre as an innovatory approach to the staging of opera theatre in a way that is rich in possibilities.

Aida is the Verdi opera that best brings together the triumph of theatrical gesture and psychological introspection. Verdi's most spectacular opera has made it possible for Controluce on the one hand to deal with the exotic imagination, suspended between mannerism and reality, of the Egyptian world as perceived by the second half of the nineteenth century; and on the other hand the completely psychological and timeless drama of the protagonists, divided and lacerated between affection and duty, love and country, real existence and imagined one.

The production is built on a concept of alternating cut-out silhouettes and shadows of the human body interacting inside dynamic scenes made of screens/clothes, which suggest landscapes, horizons and architectures of the Egyptian world. Shadows, dance and dance-theatre all co-exist within these scenes. Paola Bianchi, Raphael Bianco and Enrica Brizzi, in front of or behind the screens, follow the wanderings of the souls of Verdi's characters as they pursue their tragic destiny.

For the version with live music Controluce has chosen as collaborators the Trio Debussy and the composer Alberto Colla, who working on Controluce's adaptation of the dramatic content has reduced and transcribed Verdi's score into a "shadowy" chamber reading of the opera: a trio with a trumpet added and four singers to evoke the Nile, the pyramids and above all the inner drama of the protagonists.

Shadow is the means used to create the double, to summon up desire, memory, the imaginary and to express the psychological conflict that finds resuloution at the end with the suffering of Amneris and a harrowing cry for peace.