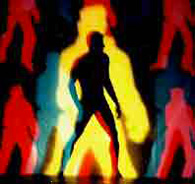 The performance is based on the Unione Musicale di Torino's idea of bringing to the stage the concert for bass strings and basoon by Sofia Gubajdulina, conceived by herself as a kind of theatrical music. "Partitura per uomo solo" (Music score for a man alone) is structured as a visual sequence that closely follows the composers dramatic intentions: a sort of unbalance fight between the individual and society which attacks and crushes him in a slow, relentless way ending in annihilation.

This performance is an example of Controluce's research on the interaction between music and shadows, and means an important step forward in the group's artistic course. For the iconography Controluce has been using material from the period when the music score was produced. Posters, photographs and paintings from the 60s and 70s in the USSR plus some American artistic expressions of the same period.

The performance première took place at the Teatro Eden of Treviso the 12th May 2001. It has also been played at the Società del Quartetto di Vicenza (Teatro Olimpico) and Unione Musical di Torino (Conservatory chamber) backed by the Orchestra d'Archi Italiana conducted by Mario Brunello and the bassoonist Sergio Azzolini. For the Unione musicale di Torino Controluce has also brought to the stage Erik Satie's short opera "Généviève de Brabant" with Paolo Poli and "Lohengrin" by Salvatore Sciarrino (Piccolo Regio, Turin, 2000)