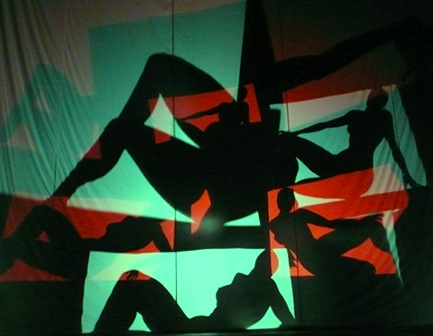 Theatrical workshop on music by Monteverdi and Stockhausen

idea: Luisa Castellani with the collaboration of Barbara Zanichelli

Popp-Kreis comes from the idea of ​​trying to weave two works very distant in time, L'incoronazione di Poppea by Monteverdi (1642) and the Zodiac by Stockhausen (1974-5), keeping the thread of the story but seizing and opening to new and unexpected suggestions. Sudden musical and stylistic deviations become possible routes of access to individual characters and their emotional world.
At the same time the Popp-Kreis project offers to the undergraduate students of the Conservatory of Lugano the chance to work in a set where different sign languages live together, from baroque to contemporary theater, using the shadow theater both as sscenery and above all as possibility of research on the psychology of the characters: shadow as double, unconscious, unspoken, dream. For that, both L'incoronazione in its wonderful game of pretense, betrayal, duplicity and sensuality, and the Zodiac Stockhausen in its abstraction and sense of destiny, offer us many opportunities.
The story of Nero and Poppea is ideally transferred closer to us, Imperial Rome will be suggested through intangible and ephemeral images of the 30s rationalist Rome, on which the characters act, love and betray.

extracts from the  radio introduction 13/02/2016 Castellani/Hargan/Jona

Monteverdi and Stockhausen
The bet of the POPP-KREIS project has been to weave Monteverdi and Stockhausen trying to make them to dialogue theatrically, thanks to the formal freedom of Monteverdi's opera -not yet reined in the formalism of the late Baroque opera- and the imaginative, changing structure of Stockhausen's Tierkries. We have assigned a zodiac sign to each one of the opera characters to see, in a symbolic way, both the characters and the dramatic articulations of the story. In this way, the 12 signs have gone to wedge themselves into the "empty" spaces of the opera, which for obvious reasons in a teaching project was reduced and simplified: the disappointed love of Otto, the irony of the nurse Arnalta, the sensuality of Poppea, the violence of Nero, the mischievous protection of Love, the order of Seneca's death, the clothes exchange between Ottone and Drusilla, the hysteria of Fortune, the bombastic gestures of Virtue, etc., inhabit the pages of Capricorn, Pisces, Taurus, Leo, Libra and so on, and become gears-like of the story moving passions, hatreds, jealousies and ideally carrying forward the action.