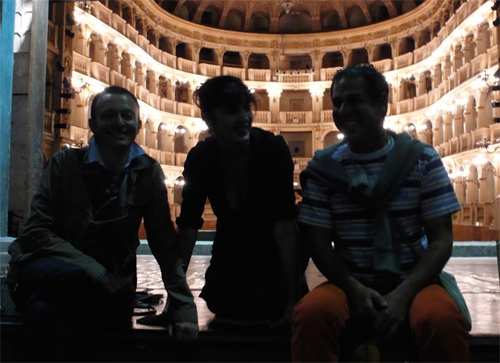 CONTROLUCE Shadow Theatre was born in 1994 in Turin after the encounter of the Spanish painter Jenaro Meléndrez Chas with musicians Cora De Maria and Alberto Jona, thanks to their shared passion for theatre. The initial idea, to combine music, abstract painting and techniques of oriental shadow theatre in a common artistic project, soon developed in two directions, one towards Puppetry -dedicated to an adult audience- and one towards Musical Theatre.

2021: In project CHI HA PAURA DEL MELODRAMMA (WHO IS AFRAID OF MELODRAMMA) for Fondazione Teatro Coccia di Novava with the revival of the opera GULLIVER by Bruno Moretti. The performances programmed for 2021 season are THE SONG OF THE TREE at Turin, Rome and Genoa, and STUDIO FOR THE 20 DAYS in collaboration with MUFANT, Fantasy and Sciencefiction Museum of Turin.

2020: Participation with a shadows scene at the opening of Teatro alla Scala of Milano, 2020-21 season. Staging, direction and shadows theatre's intervention in the opera DONNA DI VELENI,  music by Marco Podda, Libretto by Emilio Jona, direction Alberto Jona, coproduction between Fondazione Teatro Coccia of Novara and Controluce Teatro d'ombre. Pandemic causes cancellation of programmed performances like THE SONG OF THE TREE at Rome and Turin, nevertheless the company has created the performance STUDIO FOR THE 20 DAYS and has collaborated to the show WATERPEACE with Moni Ovadia, the group Ederlezi under direction of Dario La Ferla. Waterpeace has inaugurated the Festival INCANTI 2020.

2019. CONTROLUCE has signed the shadows in the opera  OMBRES DU MINOTAURE by Michéle Reverdy in Vevey and Neuchatel (CH), and the comedy BIRDS by Aristophanes staged at the Teatro Menotti in Milan, directed by Emilio Russo and winner of Enriquez prize 2019 for both direction and show. Debut of the new performance I CANTI DELL'ALBERO on music by Maurice Ravel, produced by MITO Settembre Musica in Turin and Milan .

2016: December, debut in Milan of BUTTERFLY BLUES at "Madama Butterfly in Città" project organized by the Municipality of Milan for the Scala 2016/17 season opening with Puccini's Madama Butterfly. November, Collaboration with the Unione Musicale of Turin with DES KNABEN WUNDERHORN. January, new collaboration with the ORT in Florence with GULLIVER (chamber opera by Bruno Moretti)

2015: From 2015 season, a regular collaboration in education-production projects with the Conservatory of italian Switzerland in Lugano (DID-ONE Purcell/Bussotti, POPP-KREIS Monteverdi/Stockhausen) and the Conservatory of Milan (KNOWS THOU THE LAND WHERE THE LEMON TREES BLOOM? Italian Canzoniere of Hugo Wolf, DES KNABEN WUNDERHORN Mahler). Staging and direction of Bellini's LA STRANIERA for the Landestheater Niederbayern, Germany.

2014: Controluce's debut in London (February) with HAIKU (composition by Nicola Campogrande) and Tokyo (June) with GULLIVER and also collaboration to the Kate Bush return show "Before the Dawn" at the Hammersmith Apollo in London (hailed as one of the biggest events of pop music in last decades). October, presentation in Yverdon, Switzerland, of the French new version of the  GULLIVER  with the quintet Les Boulouris 5, Francesco Biamonte and  Leana Durney. November, Basel, DIDO&AENEAS  "live" with the group Novantik Project Basel. December, debut in Turin of Adriano Guarnieri's scenic cantata THE MOURNFUL SCREECH OF STEEL (dedicated to the Thyssen Krupp steel plant tragedy happened in Turin in 2007).

2013: November,  debut in opera staging and direction with Bellini's lL PIRATA for the Landestheater Niederbayern in Germany...